“I am pleased to be a part of the Connestee Falls team and look forward to continuing the excellent reputation the CFPOA enjoys locally and throughout Western North Carolina,” said Lamb.  “This is a fantastic gated mountain community made only better by the wonderful people who live here and make it such a great place.”

Lamb was previously the General Manager for over eight years at The Great Outdoors Premier RV/Golf Resort in Titusville, Florida.  During his tenure at The Great Outdoors, the community received the “Large Scale Community Financial Innovation Award” from the Florida Communities of Excellence. The community was also runner up for the award on two separate occasions. He also led the community in becoming the first “Firewise Community USA” in Brevard County and only the second in central Florida, greatly improving wildfire safety. Keith received the “Florida Large Scale Manager of Excellence” award from the Florida Community Association Journal as well while GM of the award-winning community.

Prior to his career as a community manager, Lamb served over 22 years in the U.S. Navy in Electronic Warfare and as an Electronics Material Officer. Much of his naval career was spent at sea and at overseas stations. He worked extensively in installation, test, maintenance and repair of electrical/electronic systems and in information, physical, and personnel security. Keith’s education includes a Master’s of Business Administration, a Bachelor’s of Science in Resources Management and an Associate of Science in Information Systems. He is also a licensed Community Association Manager and a Nationally Certified Manager of Community Associations.

Keith and him wife Michelle are originally from Northwest Georgia and have three adult children.

Connestee Falls is a gated master planned community with approximately 3,800 acre where half the land is set aside in conservation and nature areas with amenities including four lakes, championship golf, a clubhouse, parks and hiking trails. The community’s Welcome Center is located at 5500 Greenville Highway, Brevard, NC 28712. 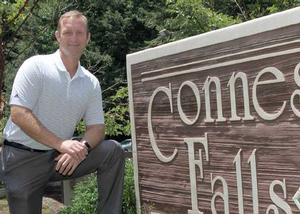