Suffice it to say, the golfing industry is a safe place to begin a successful career and that is precisely why one charity, the On Course Foundation, supports the rehabilitation of wounded, injured and sick service-members and veterans through the medium of golf.

While their main goal is to offer work placements and opportunities to service personnel and veterans suffering from physical and mental injuries, they also offer comprehensive golf tuition from their training professionals. Their reasons for doing so are simple – they believe that the sport of golf offers members a way to socialize and compete healthily, thereby improving confidence as well as physical and mental strength.

In 2012, the On Course Foundation began the Simpson Cup, an annual Ryder Cup styled tournament between 12 injured servicemen and veterans from the UK and USA. The tournament is named after its founder, John Simpson, the former Senior Vice President of International Management Group (IMG), who has only one fully functioning leg as a result of suffering from polio as a child.

Throughout the year, the On Course Foundation hosts several qualifiers in the U.S. to select the 12 lucky service members who will take part in the Simpson Cup playing for the home team. One of those qualifiers takes place here the Beaufort area every year on Dataw Island’s award winning Cotton Dike Course, a Tom Fazio design that has hosted the 2015 CGA Senior Amateur, the 2015 South Carolina Open and the 2016 South Carolina Open, along with many other amateur and professional events. This year, the qualifier will take place Thursday, July 14th through Saturday, July 16th.

“We are proud to be able to host the Simpson Cup Qualifier,” Dave Britton, Dataw Island’s Director of Golf, said. “Many veterans live here on Dataw and the membership is very supportive of military charities and foundations.”

Dataw Island is a gated golf, tennis and boating community fifteen minutes outside of downtown Beaufort. The island features two recently renovated Tom Fazio and Arthur Hills golf courses, a tennis center, a Community Center with workout /massage facilities, two restaurants and croquet lawns. Dataw’s Cotton Dike Course has been ranked as one of the top 50 golf courses in South Carolina by the South Carolina Golf Course Ratings Panel and the community has also been ranked the number one best retirement destination in South Carolina for the past year by www.bestretirementdestinations.com.

Photo: Steve Ogletree, Simpson Cup teammate hitting the first shot of the 2015 Simpson Cup Qualifier with Beaufort Post No. 9 of The American Legion looking on. 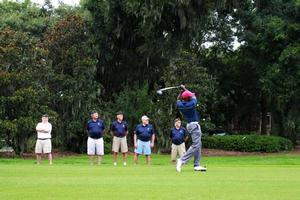