Dataw Island, SC (June 9, 2016) - The Dataw Island Club will host the 2016 Dataw Splash on June 17th, 18th and 19th.  A United States Tennis Association (USTA) level three tournament, the Dataw Splash is sanctioned by the Southern South Carolina region of the United States Tennis Association and will be held at the Dataw Island Tennis Center overlooking the scenic marshes of Jenkins Creek. Anyone who is a USTA member in the U.S. is welcome to play in this tournament.

Local and regional players will compete in men’s and women’s singles and doubles. Levels include 3.0 to 4.5 and open. Mixed doubles play is also available. The tournament will feature a player’s party, player’s gift bags and awards.

“The Splash has been an integral part of the Beaufort Lowcountry Tennis scene for over a decade now,” Warren Florence, Tennis Director at Dataw Island said. “It’s growing every year and Dataw Island takes pride in putting on such a great event.”

All proceeds of this event will go to benefit Soar Special Recreation, a nonprofit organization providing Special Olympics sports training and competition as well as many other activities and recreation opportunities for special needs children and adults throughout the Lowcountry of South Carolina. Soar works to give a ‘voice’ to special needs athletes. For over twelve years, members and residents on Dataw Island have worked with Special Olympics athletes through the National Unify Project. A project that places able bodied athletes with Special Olympics athletes and is currently the only program that provides unified tennis for these players. The Unify Program runs during the school year and students work with Dataw Staff every Wednesday to play, exercise and train on tennis courts around the local area.

Spectators are welcome and encouraged to come Friday June 17th through Sunday, June 19th at any time after 10:00am to watch these excellent athletes play the game. Admission is free! For more information call 843-838-8416.

Dataw Island is a gated golf community fifteen minutes outside of downtown Beaufort. The island features two recently renovated Tom Fazio and Arthur Hills golf courses, a tennis center, a Community Center with workout /massage facilities, two restaurants and croquet lawns. Dataw’s Cotton Dike Course as been ranked as one of the top 50 golf courses in South Carolina by the South Carolina Golf Course Ratings Panel and the community has also been ranked the number one best retirement destination in South Carolina for the past year by www.bestretirementdestinations.com. 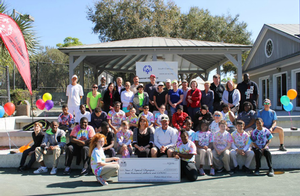