This year’s Boca Royale Semper Fi Charity Golf Tournament raised an impressive $230,000, bringing their seven-year total contributions to the Semper Fi Fund to over $1 million. Neal Communities has been supporting the event since 2012 and has been a co-sponsor ever since.

The Semper Fi Fund and its program America’s Fund provide immediate financial assistance and lifetime support to post 9/11 wounded, critically ill and injured members of all branches of the U.S. Armed Forces and their families. This ensures that they have the resources they need during their recovery and transition back to their communities.

The 2016 golf tournament and dinner was held Saturday, April 2 at the Boca Royale Golf and Country Club. General James F. Amos, 35th Commandant of the Marine Corps and the board chairman of the national Semper Fi Fund, was the guest speaker. Karen Gunther, founder and CEO of Semper Fi Fund, was also in attendance.

Since establishing the Semper Fi Fund in 2004, the nonprofit has distributed more than 106,000 grants, totaling more than $120 million in assistance to over 15,000 heroes and their families. The Semper Fi Fund has received a four-star rating from Charity Navigator for five consecutive years and an A+ rating from Charity Watch. The Fund distributes 93.5 cents of every dollar collected to the wounded and their families. 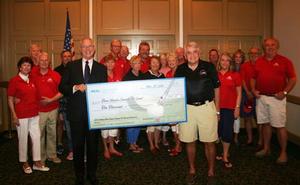