“My husband Ralph and I helped start a Special Olympics tennis program in Beaufort County more than 12 years ago,” Laura Bricker, Dataw Island resident and volunteer said. “Working with the local schools to make Special Olympics a school sport took years to accomplish and now we are glad to bring the athletes here to Dataw to practice.”

Dataw Island has been hosting Battery Creek High School and Beaufort Middle School for three years and this year Whale Branch Middle School has also joined in. Every Wednesday throughout the school year, special needs athletes and other students are brought to the Dataw Island Tennis Center to work with Warren Florence, Dataw Island’s Tennis Director.

“We do all kinds of drills, work on agility and have a lot of fun,” Warren Florence said. “It is so rewarding to watch these athletes grow in skill level and make friends.”

Over the past year, Dataw Island has started working with Soar Special Recreation -- a nonprofit organization providing activities and recreation for special needs children and adults throughout the Lowcountry of South Carolina. Soar works to give a ‘voice’ to special needs athletes.

"This is the last group of people that doesn't have their own voice, and we want them to be treated like everyone else," said Kathy Cramer, Soar Program Director and a retired special education teacher in the local school system for 33 years. "We need to help people understand who these people are so they can be included.”

In support of Soar Special Recreation in 2015, Dataw Island turned the Dataw Splash, an annual USTA Tennis Tournament, into a fundraiser for Special Olympics and raised $2,000 for Soar. This year, Dataw Island plans to do it again with the 2016 Dataw Splash Tournament on June 17th, 18th and 19th.

The Dataw Splash is a United States Tennis Association (USTA) level three tournament, sanctioned by the Southern South Carolina region of the United States Tennis Association. It will be held at the Dataw Island Tennis Center overlooking the scenic marshes of Jenkins Creek. Anyone who is a USTA member in the U.S. is welcome to play in this tournament.

Dataw Island is a gated golf community fifteen minutes outside of downtown Beaufort. The island features two recently renovated Tom Fazio and Arthur Hills golf courses, a tennis center, a Community Center with workout /massage facilities, two restaurants and croquet lawns. The community has also been ranked the number one best retirement destination in South Carolina for the past ten months by www.bestretirementdestinations.com. 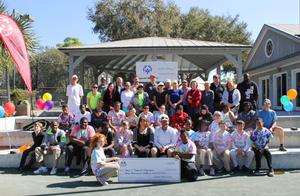