A field of 124 players from all around South Carolina will be competing on Dataw’s Cotton Dike course; a Tom Fazio design that hosted the 2015 CGA Senior Amateur and the 2015 South Carolina Open, along with many other amateur and professional events.

The SCGA Senior Four Ball Championship began in 1994 as an opportunity for individuals over the age of 55 to have a true partners Championship.  With the emphasis on lower handicapped seniors, the SCGA was allowed more freedom to move the Senior Four Ball across the State and the ability set up more challenging venues for the players looking for stronger competition.  Not to cut all players out of the opportunity to win something, the SCGA flights the field after the first round to give everyone a sporting chance for a victory of some kind.

Dataw Island is a gated golf community fifteen minutes outside of downtown Beaufort. The island features two recently renovated Tom Fazio and Arthur Hills golf courses, a tennis center, a Community Center with workout /massage facilities, two restaurants and croquet lawns. The community has also been ranked the number one best retirement destination in South Carolina for the past ten months by www.bestretirementdestinations.com. 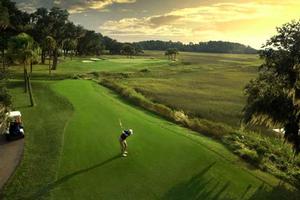