Grantham, NH - When Amy Hoffman first came to Eastman and got involved in local hiking, hike leader John Lloyd taught that being adequately prepared was essential to going up a mountain. Preparation became Amy’s bottom line for all outdoor activities. When she and her friends Maureen Connelly and Renee Gustafson decided to try winter camping, Amy was clear that they had to know everything about it before they started. The Aloha Foundation in Post Mills, Vermont offered an introductory course on winter camping, so she signed up. Armed with Amy’s new knowledge, the three intrepid campers carefully planned their first winter camping experience. It was a cold winter in 2010, but Eastman’s Heath property beckoned.

Although Renee and Maureen had experience camping with family, Amy had not always been drawn to it. She credits Leslie Moses, Eastman’s Chief Community Living Officer, for introducing her to the joys of camping. A great teacher and leader with the ability to inspire, from the beginning of her tenure as Recreation Director Leslie offered yearly, unique camping experiences for women. Along with many other Eastman residents, these three friends participated and developed a love for sleeping in a tent, cooking and eating around an open fire, and being immersed in the natural world. Setting out to do this during the coldest season seemed a natural extension of their summer and fall camping experiences on Heron Island and elsewhere.

In spite of their ingrained proclivity for preparedness, the campers had no illusions that everything would go as planned. At Aloha, Amy had learned some fundamentals, such as the best way to haul supplies, the importance of a heating/cooking source, and even how to build a fire above ground in a sling—a  technique that they did not plan on trying. Instead, they obtained a local fire permit to build a ground fire for cooking dinner and breakfast and, of course, for warmth. They made several reconnaissance trips into the Heath Forest looking for the perfect place to pitch their tent. A lovely, open spot with lots of bright sunshine initially seemed ideal, but they decided that a large rock might offer protection from the wind. Once they located the perfect rock protector, they were set.

Choosing the right gear is as essential to winter camping as choosing the right campsite. Only Maureen and Renee had sleeping bags designated for below-freezing conditions. Amy improvised with double bags, one inside of the other, to keep adequately warm. Although there are tents specifically designed for winter camping, the women used a sturdy, all-purpose tent just spacious enough for the three of them. They packed their bags along with the tent and camping equipment onto two plastic sleds that they planned to pull along behind them. They had pre-cooked chili for the evening meal, and carefully wrapped eggs in insulating material, planning to keep them in the tent with them during the night to prevent freezing. One of the things they knew about camping from their forays with Leslie was that you take along only what is essential, but simple things, like being able to sit above the ground, can fall into that category. So they also included a small folding table and several chairs. One of the most essential supplies was water, which they carried in a large plastic jug, planning to thaw it out over the fire. Their personal clothing items were carried in backpacks.

Looking a bit like they were about to cross Antarctica, they valiantly hiked into the Heath Forest one February afternoon. They arrived at their chosen camping spot without a hitch and immediately began to set up camp, unloading supplies and pitching their tent.  The exertion of pulling the sleds with their heavy loads had caused them to work up quite a sweat, which is not a good thing in the cold. Rethinking what supplies were absolutely necessary would be an important consideration for future winter camping.

Leslie had taught them the importance of carrying a fire starter such as cotton balls soaked in Vaseline. Their fire was beautiful, and once they set up their chairs and little table, they were quite cozy. Maureen, interested in who and what else inhabited their chosen space, set about peering into logs and looking for signs of animal habitat. Mallards were ubiquitous, on the bank and in the stream close by the campsite, but seemed unfazed by the visitors.

Nothing ever tastes as good as food cooked or heated up over an open fire, but Renee recalls how painfully cold their hands became when trying to prepare dinner. It was a good thing they had precooked a one-pot meal. Fortunately, the hot chili helped to keep them warm.

Amy is an early-to-bed person, but her companions stayed up later, playing in the snow and whooping it up just a bit so as not to disturb the neighbors who lived nearby. They had contacted those neighbors before the trip to let them know they would be in the area. During the night, the temperature dropped; it was just seven degrees the next morning, and, in spite of their having carefully wrapped the eggs in the folds of one of the sleeping bags, they were frozen. However, they were able to cook their favorite camping breakfast of toast with an egg in the center once they got their fire going. The beverage of choice was coffee, nice and hot.

“People think we’re crazy,” says Amy. “They wonder why anyone would want to get so cold! Sure, we get cold, but we have learned how to stay warm. All of us sleeping in one tent helps, and we dress really carefully in warm layers.”

When asked about the pleasure of winter camping, she is quick to point out that there is a unique beauty to the season. On that first morning, there was magic all around in the softly falling snow that sparkled as they opened the tent flap. Being close to nature is special in any season and seems wondrous to them in the winter, when much of outdoor life is either sleeping or trying to survive in the frigid temperature, just like the campers. Looking for animal tracks from snowshoe hares, grouse, and coyotes intrigues them. And, for at least two of them, playing in the snow is fun.

The trio hiked out of the forest in mid-morning. Aside from the frozen eggs, which actually had not been much of a disaster, they had done well. They were, in fact, so successful that they have camped in several different Grantham area locations in subsequent winters. Rather than get a fire permit each time, they have carried along a small grill, which is not as warming as a ground fire, but has served them well. Two years ago, they awoke to an icy, soaking rain and high-tailed it down from the ridge above Renee’s house to prepare a pancake breakfast in her dry, toasty kitchen. And, last year, they skied in to their site.

When L.L. Bean offered a camping course last spring, they signed up. A one-day experience, the course ended with a test requiring each participant to peruse the store and, given a particular budget, choose what each would buy for a camping trip. Amy, Maureen, and Renee were done in record time and given high marks for their choices. Well, of course. They had trained with the skilled Leslie Moses and had four winter camping experiences under their belts. A piece of cake! —campfire cake, of course.

By Judy McCarthy / Photos Courtesy of The Campers

Judy McCarthy is a retired public school teacher. She recently completed almost four years as the editor of Eastman Living and looks forward to continuing to write for the magazine. Writing prose and poetry is on her agenda as well as hiking while thinking in Spanish. 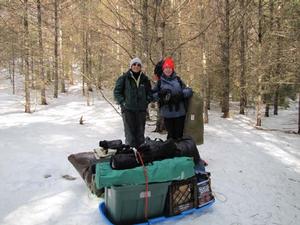