Dataw Island, SC (January 16, 2016) - The 5th Annual Resolution Run to benefit the LowCountry Habitat for Humanity took place at Dataw Island this morning at 10:00am. Over 100 runners and walkers arranged themselves on the starting line and waited for Barbara Krakehl, the Race Director and a Dataw Island Resident, to ring the bell and start the race. As the bell rang, the athletes began racing along the scenic route, eager to be the first to cross the finish line just 3.10 miles away.

The 5K was professionally timed and the event boasted activities for the entire family, including a Kids Sea Turtle Survival Challenge Obstacle Course offered by the Friends of Hunting Island Sea Turtle Conservation Project and a Community Health Fair held yesterday at the Dataw Island Community Center.

“I’ve raced all over the country and five years ago I thought this would be such a nice event for Dataw,” Barbara Krakehl said. “Every year it has grown and last year we were able to raise over $4,000 for the LowCountry Habitat for Humanity. This year we look forward to being able to donate even more, thanks to the generosity of Dataw residents and other participants. The Dataw Island Club does such a great job of welcoming us and we enjoy consistent support from the people on the island who make donations even if they can’t participate.”

At the end of the race, awards were given to the first place race finishers in a variety of age categories. During the awards ceremony, representatives from the LowCountry Habitat for Humanity gave a warm thank you for all the hard work and support given by participants and volunteers. Habitat for Humanity is a charity dedicated to eliminating substandard housing through constructing, rehabilitating and preserving homes; by advocating for fair and just housing policies; and by providing training and access to resources to help families improve their shelter conditions.

About Dataw Island
Located just east of the historic waterfront town of Beaufort, South Carolina in the heart of the Sea Islands, buyers at this secluded gated community gain access to a pair of golf courses designed by Tom Fazio and Arthur Hills, club facilities, a full service marina and unmatched recreational boating. Lots at Dataw Island begin at $35,000, with homes and villas priced from $150,000 to $1.5 million, including new homes and resales. 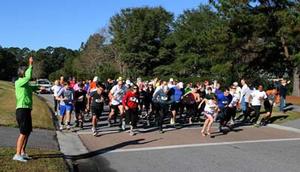