LAKEWOOD RANCH, Fla. (December 30, 2015) – Neal Communities, southwest Florida’s premier, private homebuilder, was named the No. 1 builder of the top 15 green builders in the state and dubbed “Builder of the Year” from the Florida Green Building Coalition (FGBC).

During the awards ceremony, held in Orlando, Fla., Neal Communities was honored with the top spot in the first-ever Top 15 Green Builders to commemorate the 15-year anniversary of the FGBC. The Lakewood Ranch-based builder earned the accolade for building the most green-certified homes in the past 15 years.

Neal Communities also received the 2015 Green Achievement Award for Builder of the Year – Most Homes Certified in the single-family homes category for the third consecutive year.

“It’s an honor to receive these designations, and we are extremely proud to be recognized for our green initiatives with the No. 1 spot out of 15 builders in the state,” said Cathy Engels, vice president of purchasing for Neal Communities.

FGBC certified homes complete a technically rigorous building assessment and construction process to promote design and construction practices that reduce the negative environmental impacts of the building, improve occupant health and well-being, and reduce operating costs for the owner.

“These builders are being recognized for their conscientious green building efforts in creating healthier and safer homes and a more sustainable Florida,” said Suzanne Cook, executive director of FGBC. “As FGBC marks its 15th anniversary, we're pleased to salute their contributions to creating more resilient communities and protecting Florida’s natural resources.”

The FGBC is a nonprofit dedicated to improving the built environment and continually looks for new and innovative ways to educate builders, developers, local governments and consumers about how to achieve an environmentally sustainable future. The member-based organization is the leading certifier of green projects in Florida, with over 8,000 certified projects. 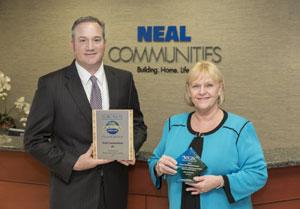