Savannah, GA (December 22, 2015) Christmas is a time a year when we all seek the joy in life and there is nothing on this earth that can make us feel more fulfilled than the joy of giving.  The Landings community has just shared their generosity and the joy of the season with the children of our military soldiers stationed at Hunter Army Airfield.

For the past fourteen years the agents and employees of The Landings Company on Savannah’s Skidaway Island have sponsored the “Adopt an Angel” program on behalf of the community.  The goal of this year’s program was to fulfill the Christmas wishes of children of local military families. In mid-November two Christmas  trees were displayed in the lobby of The Landings Company Welcome Center and decorated with ‘Angels’ – each angel identified a young child and a few of their wishes for Santa.  This year over 200 Angels were adopted by residents of The Landings.

The presents kept coming and coming and under the trees were bicycles and teddy bears, baby dolls and fire trucks, blankets to snuggle in and talking toys to giggle with, slippers and sweaters and books to enchant, soccer balls and footballs and even a giraffe. All of these gifts were packed carefully into trucks and vans and delivered to the soldiers and their families at Hunter in time for Christmas. Just imagine the smiles and delight of all these children on Christmas morning when they open their ‘wished for’ gifts from their secret Santas!

This year an exceptional young man participated in the Angel program. Owen Henderson turned five on December 1st. For his birthday party he had asked his friends, not for gifts for himself, but gifts for the families of Army soldiers. Owen loves the Army!  Owen donated almost all his birthday presents (he decided to keep just one!) to share with other children.  Eileen Galves, who headed the Angel program for The Landings Company, arranged to have Owen meet Army Staff Sgt. Peter Eady, the liaison for Hunter donations.  On delivery day, Owen and Sgt. Pete were introduced, shook hands, saluted each other and then worked side by side chatting away as they helped load the piles and piles of gifts into the waiting trucks and vans graciously provided by Byrd Heating and Air.

When all of Santa’s helpers were ready to depart, Sgt. Pete and his sidekick led the caravan of vehicles to Hunter Army Airfield.  Owen had the opportunity to meet more soldiers as all the Christmas packages were unloaded and hidden away until Christmas morning. Owen undoubtedly embodied the true spirit of Christmas!

About The Landings:
The Landings on Skidaway Island is located less than ten miles south of historic Savannah.  Named “one of the nation’s best residential communities” by the Urban Land Institute, and “The Best Planned Community” by Savannah Magazine, the community has been run by its debt-free homeowner’s association for the last 15years. Homes range from $200,000 to $2 million plus. Other resident facilities include 2 deep-water marinas, 40 miles of walking & biking trails, playgrounds, athletic field, dog park, a Village Library and Skidaway Farms, a community garden. Club amenities consist of six championship 18 hole golf courses, 34 tennis courts, five pools (two indoor), four dining clubhouses and a 48,000 sf fitness/wellness center. 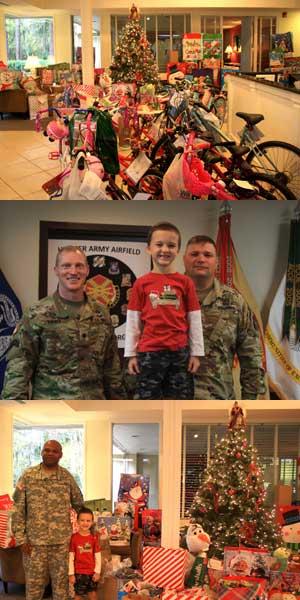