With a grand opening held in September 2012, the neighborhood was the first built under the Sarasota 2050 plan objectives and demonstrates a successful approach for building in concert with local government while preserving the environment. The neighborhoods are connected via an extensive 27-mile, multi-use trail system.

Appealing to a multigenerational demographic, over 450 families call the unique, master-planned community their home. Grand Palm was honored with a prestigious AURORA Award for best community over 500 acres in the southwest U.S. by the Southeast Building Conference (SEBC). Centrally located, the community is close to world-class beaches, plentiful amenities and the city centers of Venice and Sarasota.

“The reaction to this community has been overwhelming over the past three years,” said Michael Storey, president of Neal Communities. “Grand Palm took years of diligent planning and involved cooperative partnerships with public officials and environmental specialists to create. As we continue to add amenities like parks and Look Out Point Island to the neighborhood, the residents’ lifestyle is continually enhanced. The result is a beautiful community intertwined with the natural Florida landscape, and it has been embraced by the homebuyers,” he said.

One- and two-story homes range in size from 1,079 to 3,346 square feet, and pricing starts in the high $100,000s. Grand Palm is a certified green community by the Florida Green Building Coalition (FGBC).

About Neal Communities
Neal Communities was named one of 2012's "America's Best Builders" by BUILDER Magazine and voted the “2013 Best Residential Builder in Southwest Florida” in a readers’ poll sponsored by Gulfshore Business Magazine. The company is ranked No. 1 locally by Metrostudy and by Hanley Wood Market Intelligence based on number of home sales and ranked nationally among the top 50 builders by BUILDER Magazine. To date, Neal has built over 10,000 homes in southwest Florida. As the area's largest and most established, locally owned and operated private builder, Neal Communities is continually striving for excellence in every aspect of the home building and development business. Neal Signature Homes, Neal Land Ventures, Charlene Neal PureStyle, Waterscapes Pools & Spas, Neal Communities Funding, Fiducia Insurance and Allegiant Title Professionals all contribute to the firm's continued, record-setting local success. The company's honors and accolades include 44 Parade of Homes 2015 awards, 50 Aurora Awards, 5 Best in American Living Awards and hundreds of local and regional industry awards. 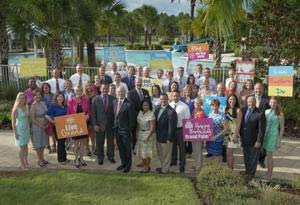