Neal Communities Continues to Break its Own Sales Records

Grand Palm, Neal’s master-planned community in Venice, Fla., continued to lead in sales with more than 100 visitors passing through its welcome center each week and totaled 17 sales in March. The Boca Royale Golf & Country Club in Englewood had 15 sales and Wildgrass, Neal Signature Homes’ newest community in Sarasota, had four sales.

“We have an ambitious business plan for 2015 with six new communities already opened and four more on the way,” said Nicole Brooks, director of sales for the Lakewood Ranch-based homebuilder. “Our team puts a tremendous emphasis on professionalism, customer service and integrity, and it pays off with happy homeowners and referrals. We look forward to adding more communities and more opportunities to expand the Neal Communities’ brand in southwest Florida,” said Brooks.

In March 2015, Neal Communities opened its first model in Hillsborough County at The Reserve at South Fork, and this month, the company will unveil the Magnolia Point community in Manatee County and Indigo in Lakewood Ranch. In May, Neal Signature Homes will host a grand opening of its MiraBay model in Apollo Beach.

Additionally, Neal Communities recently added eight full-time employees to its team. The new additions are part of a major Neal hiring initiative fueled by record-setting sales numbers and 10 new Neal neighborhoods opening in 2015. With the recent hires, Neal has now brought onboard 68 new employees since the beginning of 2014.

About Neal Communities
Neal Communities was named one of 2012's "America's Best Builders" by BUILDER Magazine and voted the “2013 Best Residential Builder in Southwest Florida” in a readers’ poll sponsored by Gulfshore Business Magazine. The company is ranked No. 1 locally by Metrostudy and by Hanley Wood Market Intelligence based on number of home sales and ranked nationally among the top 50 builders by BUILDER Magazine. To date, Neal has built over 10,000 homes in southwest Florida. As the area's largest and most established, locally owned and operated private builder, Neal Communities is continually striving for excellence in every aspect of the home building and development business. Neal Signature Homes, Neal Land Ventures, Charlene Neal PureStyle, Waterscapes Pools & Spas, Fiducia Insurance and Allegiant Title Professionals all contribute to the firm's continued, record-setting local success. The company's honors and accolades include 42 Parade of Homes 2014 awards, 50 Aurora Awards, 5 Best in American Living Awards, and hundreds of local and regional industry awards. 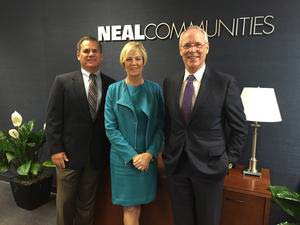