This year, the homebuilder also hit a major milestone by delivering more than 10,000 homes to families in Florida since its inception in 1970.

“We also started to see smaller down-payment options begin to re-emerge into the mortgage market and slowly saw wages move up,” said Neal. “National factors like the threat of a government shut down and higher interest rates certainly affected the homebuilding industry, and we are slightly under where we thought we would be for the year. Nonetheless we still had exceptional results in 2014, which we are proud of.”

Neal Communities opened nine new communities in 2014 from Manatee to Collier counties and expects to unveil eight in the first quarter of 2015, starting a five-year expansion plan.

Clearly the No. 1 homebuilder by the numbers in Manatee and Sarasota counties, the builder’s growth in its core Manatee market has fueled the county’s economic development with the addition of 70 new employees. The firm paid impact fees totaling more than $6.5 million in 2014.

“In Manatee County, we have a 20 percent market share, which is almost unheard of across the nation,” said Michael Storey, president of the Lakewood Ranch-based company. “Typically a homebuilder looks for 5 percent market penetration in a major metro market; the fact that we’ve had such a high share and maintained it for so long is a testament to our dedicated and hard-working team, and to the strength of our always-evolving home product and community lineup,” said Storey.

In Manatee County, Neal sold 490 homes this year, with 190 homes sold in Sarasota and 184 homes sold in its southern division of Lee and Collier counties.

The builder launched Neal Land Ventures and acquired approximately $34 million in land assets and invested a total of $89 million in new development when completed.

“We brought 1,300 new homesites online,” said Storey. “We are gearing up for tremendous growth over the next five years.”

Storey noted that three years ago, the 25-44 age demographic was about 12 percent of Neal’s business, but in 2014 it grew to 20 percent. “That buyer is slowly starting to come back to the market, so there is more opportunity for growth, and as we expand into Hillsborough, that’s a buyer we’ll look to attract in addition to our core segment of active adults or older people with active lifestyles (OPALS).”

Moving ahead into the New Year, Neal Communities’ leaders expect a continued robust housing market. “I think we will see volumes increase and pricing appreciate in 2015. What works best for us is slow, sustainable, predictable growth. And if we can stay in that space in 2015, we see a continued housing recovery,” said Storey.

About Neal Communities
Neal Communities was named one of 2012's "America's Best Builders" by BUILDER Magazine and voted the “2013 Best Residential Builder in Southwest Florida” in a readers’ poll sponsored by Gulfshore Business Magazine. The company is ranked No.1 locally by Metrostudy and by Hanley Wood Market Intelligence based on number of home sales and ranked No.50 nationally among homebuilders by BUILDER Magazine. To date, Neal has built over 10,000 homes in Southwest Florida.

As the area's largest and most established, locally owned and operated private builder, Neal Communities is continually striving for excellence in every aspect of the homebuilding and development business. Neal Signature Homes, Neal Land Ventures, Charlene Neal PureStyle, Waterscapes Pools & Spas and Allegiant Title Professionals all contribute to the firm's continued, record-setting local success. The company's honors and accolades include 42 Parade of Homes 2014 awards, 50 Aurora Awards, 5 Best in American Living Awards and hundreds of local and regional industry awards. 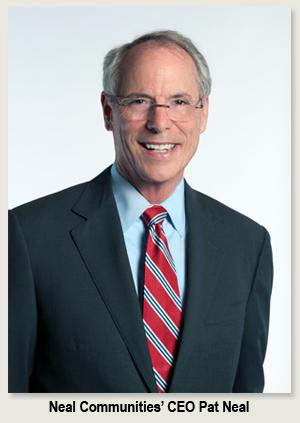