Viera, FL (July 9, 2014) - On the morning of July 4, the gates at Indian River Colony Club will close and a group of residents will gather near what probably is the community’s most prominent feature — its flag — to commemorate Independence Day.

They will pledge allegiance, sing the national anthem, hear a few remarks from a selected member of the community and return to celebrate the holiday with a half-serious parade of decorated golf carts, all in good nature, because that is the way things are done at IRCC.

In the course of it all, they may just chat about what IRCC is, isn’t and means to them. “I have lived in a lot of different places, and I mean a lot,” says Dee Moskowitz, who moved to IRCC in 2004 with her late husband, Marvin.

“But this is ... amazing.” Founded by Air Force Brig. Gen Charlie Briggs and fellow retired military officers, and incorporated in 1986, it is a nonprofit corporation that operates a gated, 55-plus community for former and current members of the U.S. military, as well as up to 20 percent nonmilitary residents. It has meeting facilities, a restaurant (the At-Ease Club), a social center (Colony Hall), a full-sized pool and an 18-hole golf course, all of which serve more than 1,500 residents in 771 homes.

“It has almost everything,” says new resident Rich Grissom.

It also has streets with names like Independence, Freedom, Valley Forge, Old Glory and Patriot. What it does not have is a post/base exchange, a commissary or quarters, though such subjects have been known to come up from time to time in the course of joking conversation. Early in its history, motorists were known to ask the gate guards where they could get military IDs renewed.

The enclave is not a mil-itary installation nor does it have any connection with any government agency, other than the histories of those who have served them. It has been home to some who have served with special distinction, including the pilot of Air Force One, a military adviser to President John F. Kennedy during the Bay of Pigs invasion, the World War II naval aviator who was father-in-law to a presidential candidate, a translator at the Nuremberg Trials and scores of veterans with decorations most museums would envy.

Famous generals and admirals visit and speak at IRCC, and famous generals and admirals live there, though they eschew their titles. “My friends are amazed at the history in this community. We live here among real American heroes,” says Grissom, a retired Baltimore police officer and Marine who moved to IRCC last month with his wife, Sally, a retired prosecutor. “We are interested in military history, and so we went to a military history symposium, and it was just people sitting around telling stories — firsthand stories.

The military and military traditions are really honored here... but no one wears rank. A brigadier general lives across the street, and you’d never know he was a general.”

Moskowitz is among those people you’d never have known about unless the conversation turned to posts, assignments and Army jokes.

The child of military officers, she moved “from pillar to post” as a child, in her words, and then became an Army nurse like her mother, with service in Hawaii, Germany and at various posts in this country.

“I remember looking at a plaque on the wall of (quarters) at Fort Riley, Kansas, on which were inscribed the names of all the officers who lived there since it was built, around 1900. I would be the first woman,” she says.

Moskowitz ended up heading hospitals; a pioneering colonel who on June 14 at IRCC’s Army Ball wore, among other decorations, the Bronze Star Medal for her service in Vietnam. Each branch of service has an annual ball at IRCC, and everyone from every service turns up to celebrate, some, like Moskowitz, in mess dress uniforms, and some in gowns and tuxedos.

There also are dances, dinners and holiday celebrations.

In Grissom’s words: “Something always is happening here.”

Music may be provided by the colony’s own musicians and singers under the direction ofretired Col. Hal Gibson, who conducted the U.S. Army Field Band and Chorus during bicentennial celebrations in 1976 and who is considered one of the world’s premier bandmasters.

“We dance the night away,” Moskowitz says. Such activities are relatively easily done, because at IRCC everyone knows everyone else. Maureen Reeder, who does graphics for the colony and assists with public affairs, jokes about “having all the names,” past and present. She addresses residents familiarly when they come through the door.

“I have lived in a lot of different communities, but I never have lived in one that is two miles from end to end but you know people who live two miles away,” Moskowitz says.

“(Military) service is the tie that binds, and it is visible here. It retains that camaraderie, that feeling of community, even among people who are not military.”

Grissom uses nearly the same words: “The camaraderie you find here is seen in almost everything. It’s a very close, friendly community.” It intends to show itself again July 4 with that ceremony repeated each year as well as each Veterans Day and Memorial Day.

“Patriotism is very important here,” Moskowitz says. “It is in everything we do. The people of IRCC would stand up and fight for anybody (wronged). If anybody (in the military leadership) said, ‘We need a unit,’ even now, these people would stand muster, regardless of age or anything else. The country means that much to us.”

It is, she adds, “a very unique community.”

“I don’t know how to explain it, other than to say that the people are what make the place,” she says. “It probably is the greatest place in the world in which to live.” 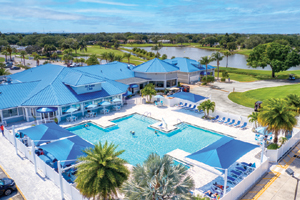