Viera, FL (July 2, 2014) - The Military Society of the Blue Badge, a fraternity of combat infantrymen which meets monthly at Indian River Colony Club in Viera, recently presented the medal of The Order of St. Maurice to Sgt Scott Fennell U.S. Army and to Mr. Jerry Nelms, Blue Badge Society president. SFC. Juan Santiago, USA Ret., member of The Order of the Blue Badge Society made the presentations on behalf the US Army’s Chief of Infantry and the National Infantry Association.

Saint Maurice has long been the Patron Saint of the Infantry, and The Order of St. Maurice medallion is awarded to officers, noncommissioned officers, and special nominees who have made a significant contribution to the infantry.

In addition to the investiture ceremony, Jerry Nelms presented SSgt (P) Joseph Bagnall a plaque from The Blue Badge Society recognizing his achievement as an Outstanding Army recruiter. 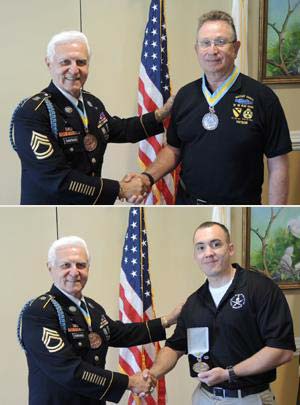