Englewood, FL (May 5, 2014) - Neal Communities is a major co-sponsor of the 5th annual Semper Fi Golf Tournament with a donation of $10,000 for the third year in a row. The tournament, hosted by residents of Neal’s Boca Royale Golf & Country Club in Englewood, has a goal of bringing the aggregate amount raised over the past five years to $500,000.

“It’s always inspiring when a group of people in a community get together to make a difference,” said Pat Neal, President and CEO of Neal Communities. “We are thrilled to be a part of this tournament again, and we stand behind the residents of our communities in their efforts to improve the lives of others. The Semper Fi Fund is such a worthy organization because of all they do for the men and women who have served our country, and we want to do whatever we can to help,” said Neal.

“The entire community is behind this event, and every resident has been involved in some way, contributing to the success of this fundraiser. Whether they are volunteering, golfing, or donating their time and money, our community has really pulled together to make this a successful event,” said Frank Lugo, Chairman of the tournament and Boca Royale resident.

The tournament was held this morning, with registration at 9:30am and lunch served at 10am. The tournament tee-off was at 11am – participants will close the evening with cocktails at 5pm, followed by dinner, a raffle, live auction, and guest speakers from 6pm to 8:30pm. For more information about Boca Royale Golf & Country Club, please visit http://www.bocaroyale.com.

The proceeds from the tournament will benefit the Semper Fi Fund and its program, America’s Fund, a 501(c)(3) nonprofit which provides immediate financial assistance and lifetime support for injured and critically ill members of the U.S. Armed Forces and their families. For more information about the Semper Fi Fund, visit www.SemperFiFund.org.

About Boca Royale Golf & Country Club:
This gated southwest Florida golf community offers new single-family and attached homes for sale in a country club environment 15 minutes from the beach and close to shops, restaurants and schools in the laid-back Gulf Coast city of Englewood. Two- and three-bedroom Single-Family Homes and Attached Villas are priced from $186,990 to $285,990.

About Neal Communities:
Neal Communities was named one of 2012's "America's Best Builders" by BUILDER Magazine and voted the “2013 Best Residential Builder in Southwest Florida” in a readers’ poll sponsored by Gulfshore Business Magazine. The company is ranked #1 locally by Metrostudy and by Hanley Wood Market Intelligence based on number of home sales and ranked #64 nationally among homebuilders by BUILDER Magazine. To date, Neal has built over 9,000 homes in Southwest Florida. As the area's largest and most established, locally owned and operated private builder, Neal Communities is continually striving for excellence in every aspect of the home building and development business. John Neal Homes, Neal Signature Homes, Charlene Neal PureStyle, Waterscapes Pools & Spas, and Allegiant Title Professionals all contribute to the firm's continued, record-setting local success. The company's honors and accolades include 42 Parade of Homes 2014 awards, 49 Aurora Awards, 5 Best in American Living Awards, and hundreds of local and regional industry awards. 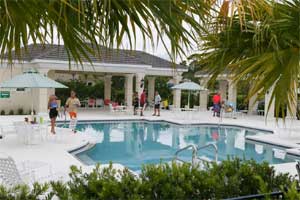