Southport, NC (April 8, 2014) - After a one-week hiatus from tournament play, The eGolf Tour will return to action next week in Southport, NC for the fifth annual Championship at St. James Plantation, to be contested at the Nicklaus Design Reserve Club, April 9-12, 2014.

In just four years, the Championship at St. James Plantation has quickly become one of the tour’s marquee events. The serene coastal setting brings to mind the backdrop for a famed Pat Conroy novel, but the stout Reserve Club venue found inside the gates of the St. James Plantation property quickly isolates itself as the proverbial star of the show, proving annually to be one of the most arduous layouts on the eGolf Tour rotation.

Upon opening in 2006, The Reserve Club was named "Best New Course in North Carolina" by the 130-member North Carolina golf panel. In 2007, that same panel selected the top 100 golf courses, and The Reserve Club debuted at No. 39, the highest ranking of any first-time nominee. This year, the club came in at No. 53 on the panel’s recently released list of the top 100 courses.  The Reserve Club course features a plethora of demanding tee shots and approach shots, as the Nicklaus Design highlights some of the area’s native ponds and forests to create a multitude of risk/reward shots. At 7,212 yards, it is of average length by modern professional standards, but the prevailing winds off the nearby Atlantic can alter the yardage of any hole, at any time.

“The Reserve Club combines both immaculate conditioning and demanding shot strategy to present without doubt one of the best courses we play all year. That combination in and of itself has made this event a wonderful success since its inception in 2010,” said eGolf Tour president David Siegel. “Every year, our players know that, if they can reach 8-under par through four rounds, they have a legitimate shot at winning the event. You can’t say that very often on any tour – be it the PGA TOUR or the eGolf Tour.”

Past Tournament Victories
This will be the tour's sixth trip to the Southport area in the past four years. In 2010, three-time Canadian Amateur champion and current Web.com Tour member Richard Scott won his second career eGolf Tour title with rounds of 71-69-70-70--280 (8-under) for a two-shot victory over former University of Georgia teammate and current PGA TOUR player Brian Harman.

At the event's 2012 edition, former UNC-Wilmington star and area resident Josh Brock claimed his first career eGolf Tour title with a three-shot win over Shawn Jasper and PGA TOUR member Peter Malnati. Brock’s 10-under 278 tally for the week marked the first time in tournament history that a player had reached double digits under par.

The tournament’s 2013 edition proved to be the toughest yet, with Tennessee native Bryce Ledford winning by two shots after a final-round 66 left him at 6-under 282 for the week. Ledford’s brilliant final round, which featured five birdies over his last 10 holes, left him two clear of Minnesotan Travis Ross. By week’s end, only five players managed to break par.

“At this level, players are always looking to compete where even par or even a couple under is a good number,” Siegel said. “Developmental tour golf is littered with tournaments where 20-under par gets you a top-5, maybe. At the Reserve Club, we simply show up knowing that’s not going to be the case.”

Steven Fox (Chattanooga, TN)
A former UT-Chattanooga star, Fox won the U.S. Amateur Championship at famed Cherry Hills Country Club in 2012 after earning the 63rd of 64 match play seeds in a 17-players-for-14-spots playoff following the conclusion of 36 holes of stroke play. The victory delivered exemptions into the 2013 Masters Tournament, U.S. Open and Open Championship, as well as seven additional starts in PGA TOUR-sanctioned events, including this year’s AT&T Pebble Beach National Pro-Am. The current Web.com Tour member has two top-25s in four starts this year on the eGolf Tour, including a career-best T9 at last week’s Cowans Ford Open.

Drew Weaver (High Point, NC)
2007 British Amateur champion led the 2012 eGolf Tour money list with earnings of $121,737, thanks in part to two wins and nine additional top-5 finishes. Weaver, a former Virginia Tech standout, finished T2 at the Columbia Open in May of 2012, then notched two wins (Willow Creek Open / Southern Open) and three more runner-ups during a six-tournament stretch that vaulted him past the $100,000 mark in single-season earnings - the fastest player in tour history to reach that milestone. After an up-and-down campaign in 2013, Weaver has played well early this year, recording three top-20 finishes, including top-10s in two of four events. In four career starts at St. James, Weaver has two top-25 finishes (T18/2011, T21/2012).

Seamus Power (West Waterford, Ireland)
The tour’s current leading money winner, Power is just one week removed from earning his third eGolf Tour title at the Cowans Ford. The former East Tennessee State star has been a study in consistency thus far in 2014, posting top-5 finishes at both Palmetto Hall and Callawassie Island prior to the Cowans Ford win. After picking up two wins in 2012, Power recorded three runner-up finishes in 2013. The Huntersville, NC resident posted a career-best T11 at St. James last year, offsetting missed cuts in both 2011 and 2012.

Derek Rende (Soddy Daisy, TN)
Rende, a teammate of Fox’s at Chattanooga, is currently fourth on the tour’s money list after posting top-10 finishes in his first three starts of the year. The affable Moc tied a career-best in his last start at the NorthStone Open, finishing runner-up to Adam Webb. Rende is married to former Alabama star and current LPGA member Brooke Pancake.

Tournament Details
Tournament week at St. James will kick off on Monday, April 7th with the first annual St. James Pro-Am to benefit the Duke University School of Nursing. The charitable event will feature 35 teams of professionals and amateurs competing in shotgun starts at either 7:30 AM or 12:30 PM. Following the conclusion of play, the club will host an awards banquet and dinner, with a live silent auction to help generate donations.  The tournament proper will begin on Wednesday, April 9th at 8:00 AM, with players competing in threesomes off of Nos. 1 and 10 tees. Following the conclusion of 36 holes, the field will be cut to the low 35 percent and ties for the final two rounds of play. The tournament is open to the public and free of charge. 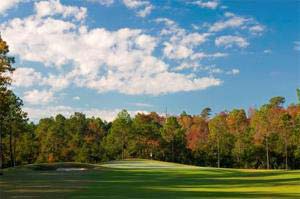