Growth Accelerates at Carnes Crossroads, One of Charleston, SC’s Most Dynamic New Communities

CHARLESTON, S.C. (January 16, 2017) - In a region where it is estimated that approximately 45 people are relocating daily, developers and builders are working overtime to keep up with demand for housing, services, schools and conveniences for a growing population. Thanks to foresight and  years of careful planning, all of those elements are now coming together beautifully within a thoughtfully planned community that is taking shape right in the heart of Charleston’s growth. Carnes Crossroads, a 2,300-acre community from the same team responsible for creating the award-winning island town community of Daniel Island, is emerging in Summerville, one of Charleston’s most popular and fastest growing submarkets.

Drawing from the same planning and design principles that have helped make Charleston’s Daniel Island a top residential choice, the master plan for Carnes Crossroads carefully blends traditional neighborhoods with parks, trails, a school and church, and a variety of conveniences and amenities. The first of many neighborhoods is near completion, and growth of new neighborhoods and the commercial offerings at Carnes Crossroads are starting to accelerate. In the past year alone:

It is anticipated that over time Carnes Crossroads will become home to approximately 15,000 residents and develop as a central gathering place for Summerville and the neighboring city of Goose Creek. In addition to medical offices and a new hospital, the community will be home to shops, restaurants and a wide array of conveniences, along with parks, trails, lakes and other amenities for residents. 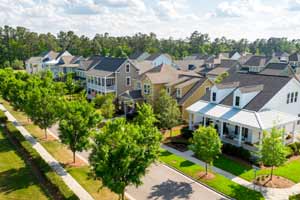