SUMMERVILLE, S.C. (July 28, 2016) - With the first neighborhood in Carnes Crossroads nearly sold out, new roads, lakes, parks and trails are coming together to form St. James Park, the second of many neighborhoods planned for this emerging master planned community from the Daniel Island Company. Homes by all five builders at Carnes Crossroads - Ashton Woods, David Weekley Homes, John Wieland Homes, Sabal Homes and Eastwood Homes - will be available in St. James Park, and some new home plans will be introduced.

“Now that we have our first neighborhood nearly complete and our streets have come alive with residents of all ages, the appeal of our community is really starting to become apparent to potential new residents,” said Chuck Buck, Broker-in-Charge at Carnes Crossroads Real Estate, which represents all new homes for sale within the community. “We’ve had people move here from across the country and are excited to soon have additional options for the many people interested in our growing community.”

More than 100 families now call Carnes Crossroads home or are in the process of building their new home within the community. Amenities like a growing network of trails, the first of many parks, a swimming pool and a refurbished historic Green Barn that serves as an open-air venue for community events are among the attractions within this thoughtfully planned community that are catching the attention of buyers. Residents also have easy access to the first commercial offerings at Carnes Crossroads, including a church and an assortment of medical offices and services. Also in the works are an assisted living community and a 50-bed, full-service hospital which will be part of a 90-acre medical campus from Roper St. Francis, the Charleston area’s only private, not-for-profit hospital system.

About Carnes Crossroads:
Carnes Crossroads, a 2,300-acre master planned community located in the heart of Charleston, South Carolina's growth, is evolving as a significant residential and commercial center in the Goose Creek and Summerville area of Berkeley County. The traditional residential neighborhoods, southern architecture, parks, trails and lakes at Carnes Crossroads are being carefully integrated with retail businesses, corporate offices, medical facilities, schools and churches to create a small-town community where people live, work and play. The ownership and development team behind Carnes Crossroads is also responsible for the highly successful 4,000-acre community of Daniel Island in Charleston. 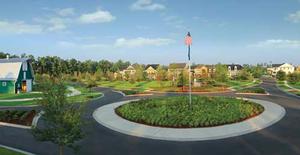